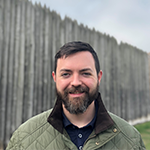 Justin Bush was hired as the executive coordinator to the Washington Invasive Species Council in 2016. Justin has been working on invasive species issues since 2008 with federal, state, regional, and local organizations including King County, Skamania County, and the Lady Bird Johnson Wildflower Center at the University of Texas at Austin where he managed the Texasinvasives.org statewide partnership. During these years, he has been involved in various projects to prevent, detect, and control both aquatic and terrestrial invasive species and is passionate about reducing the threat they pose to the economy, native species and ecosystems. When not working to stop invasive species, Justin can be found kayaking, SCUBA diving, riding motorcycles, and traveling.

Jessica joined RCO in 2022, coming with many years of experience with invasive species from her previous position with the Washington State Department of Agriculture’s Pest Program, where she worked on projects from apple maggot to vineyard snail. Jessica was the primary public point of contact for the department when the discovery of northern giant hornet in Washington State became national news and a viral Internet sensation. She helped dissect the first northern giant hornet nest found in the United States and was featured on the Discovery Channel, RFD-TV, and YouTube. She holds a bachelor’s degree in English from the University of Alaska Anchorage, and a master’s degree in agricultural sciences and extension education from Colorado State University. Born and raised in a small town in Alaska, Jessica has lived in Washington for more than a decade. In her free time, she enjoys spending time with her horse and dog and making strange, joyous art.

Maria Marlin joined RCO in 2022 from Oregon State University, where she served as a research and extension agent at a satellite station in Aurora. She was part of the nursery plant pathology program, where she organized trainings, developed fun and informative educational material, conducted outreach to underserved audiences, and performed research funded by grants she wrote. Before that, she attended the University of Idaho completing her master’s degree in natural resources. Originally from Pennsylvania, Maria double-majored in biology and environmental science at Bridgewater College in Virginia. Maria has a deep passion for the outdoors and thoroughly enjoys exploring the Pacific Northwest! She loves to ride horses, climb mountains, and photograph fungal biodiversity.

Julia joined RCO in 2019. She worked as an administrative assistant before promoting to board liaison. She earned her bachelor’s degree in biology from Saint Martin’s University in 2017. In her last year of college, she spent time studying the invasive species, the New Zealand mud snail. In her free time, Julia enjoys hiking and nature walks.